The Crux Easton Wind Engine is located 1 mile off the A343 between Highclere and Hurstbourne Tarrant.

Erected in 1891/2, it is a rare example of a ‘Simplex’ self-regulating geared wind engine.  Its 20ft wind wheel is mounted on a steel tower and it has 48 5ft long adjustable canvas sails and a fan tail, enabling the engine to turn into the wind.  The mill house itself is thought to pre-date the wind engine.

The wind engine originally ground corn and pumped water, the water being supplied from a 400ft well to the Manor House and farm only, for agricultural purposes.

It has been unused since the 1920's but somehow managed to survive both the WWII initiative to collect metal, and the gales of the late 1980's!  The tower has now been extensively restored, as has much of the wind wheel.

Crux Easton Wind Engine is open to the public at certain times of the year.  For more details visit Hampshire Mills, Wikipedia or www.hias.org.uk/projects.htm. 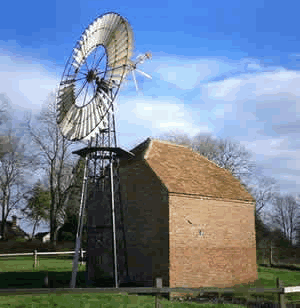